Looking for plans near Dubai? This tour along the east coast of the United Arab Emirates will take you to towns such as Khor Fakan and Al Bidya - you'll even get to see the country's oldest mosque! 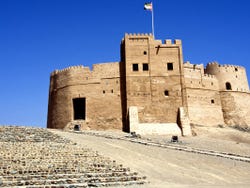 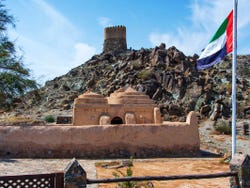 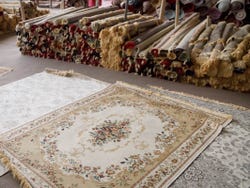 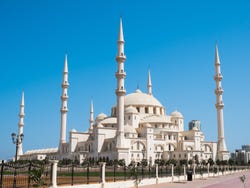 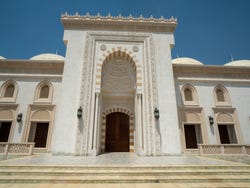 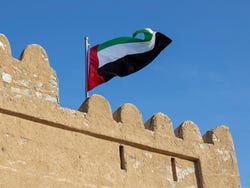 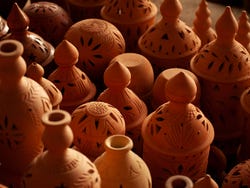 After picking you up from your hotels in Dubai between 8:30 and 9 am, we'll set off on an hour's journey to the Friday Market, near Masafi.

On the journey, we'll leave the skyscrapers of Dubai behind and as we pass incredible views of mountains and agricultural areas of Al Dhaid. Once we arrive at the market, you'll be able to explore its many stalls full of fruits, vegetables, carpets, toys... You can find almost anything!

After the visit to the Friday Market, we'll hop back on the bus and head to the famous Sheikh Zayed Mosque in Fujairah, the second largest mosque in the United Arab Emirates. Due to its colossal dimensions, it can accommodate up to 28,000 worshippers!

After visiting the temple, we'll make our way to the Fujairah Fort. Built in 1670, it is the oldest fort in the country and was the most important defensive building on the coast for centuries. We'll tell you many curiosities of this construction that has also come to serve as a residence for high officials of the emirate. You're sure to love the restored houses showing the traditional Emirati way of life near the Fujairah Fort.

Next, we'll cross the city of Khor Fakan admiring its incredible waterfall along the way until we reach the Al Bidya Mosque, built in 1446 between the mountains of Hajar. Although other Islamic temples had been built before this time, this is the oldest mosque still standing today - it's practically the same as it was in the 15th century!

We'll also visit an ancient Roman theater and then return back to Fujairah, where we'll leave you two and a half hours for lunch. With our stomachs satisfied, we'll start on our way back to the hotels, arriving between 4:30 and 5 pm.

If you book this excursion with lunch, you'll enjoy a delicious buffet lunch at a hotel with a private beach. Water and soft drinks are also included. If you opt for the option without lunch, you'll have time for lunch on your own at a Fujairah restaurant of your choice.

* The price varies based on the chosen date

All of our providers comply with local legislation and applicable health recommendations to avoid the spread of Covid-19. Show more

Tours or activities will not consist of more than 15 people per group.

A safe distance of one metre between clients will be maintained whenever possible.

The use of masks is obligatory. Masks will be given to those clients who do not have their own.

Alcohol gel will be available before, during, and after the service.

All those running the service (guide, driver etc...) will wear a mask throughout its duration.

All those running the service (guide, driver etc...) will wear gloves throughout its duration.

Handing out of printed material such as maps or brochures will be avoided.

It is mandatory to present a complete vaccination certificate. The vaccine must be accepted in the country of activity.

The transport used will be disinfected before and after each service and deep-cleaned every 24 hours.

The capacity of all means of transport will be reduced to 50% of their maximum capacity.

At monuments, museums and attractions, the maximum permitted capacity will be a 50% of the total maximum capacity.

Showing your voucher on your phone will be enough, and it is not necessary to print anything.

Alcoholic drinks are not available.

The temperature of all attendees will be taken, and admission will be denied to those with a temperature of more than 37 degrees Celsius (99 Fahrenheit).

The activity takes place with a guide that speaks in English.

Transport by bus or minibus

Food and drink (depending on selected option)

You can book up until 18 hours before the activity as long as there are still places. Book now to guarantee your spot.

Electronic. Show the voucher on your phone.

All services published on Civitatis are carried out in accordance with our Sustainability Code. Specifically, this activity applies the following practices: Show more

Include water in recyclable cartons.

No single-use plastics are used.

The indigenous community participates in the management of the activity.

The activity helps to promote peace.

The activity helps the dissemination of local cultural heritage.

No printing of documentation required.

If you have any other questions please contact us.

from
US$ 103.50
No hidden fees or surcharges
Free cancellation up to 4 days before
Book

Free! Free cancellation up to 4 days before the day of the activity. If you cancel under this time or do not show up, you will not be refunded.

These are genuine reviews written by our customers.

I travelled with friends
10

Fantastic, especially Tarek the Spanish speaking guide, totally recommended if you have to do this excursion ask him to do it for you. Very cultured person who explained everything to us fantastically and has taken us to very interesting places to get to know the culture of this country and the people well. Thanks Opinion translated. Show original.

I travelled with teenagers
10

Excellent, the guide a genius !! I highly recommend it Opinion translated. Show original.

I travelled by myself
8

An interesting excursion although perhaps it would be necessary to include an additional stop to enjoy a little more of the coast and the beach. Our driver / guide was great and very friendly. Pick up on time at the hotel. Opinion translated. Show original.

Excellent experience! Bilal is a great guide who explains the history of each place visited in a detailed and understandable way. Very good service. 100% recommended. Opinion translated. Show original.

I travelled with friends
Show all the reviews
like

9.20 / 10 709 reviews
Experience the best of Dubai: see the city’s most iconic sights and spend an evening in the desert with dinner underneath the stars.
US$ 155
Book