Construction on the Palm islands began in 2001 and was completed in 2008. Seven million tonnes of rock were used to build the foundations, and 120 million cubic meters of sand were dredged from the seabed to make the island. That's enough to make a 2-meter wide wall that would circle the globe three times.

Palm Jumeirah is part of a bigger project which includes a further two islands, Palm Jebel Ali and Palm Deira, which are still to be finished.

Besides being a major tourist attraction, the Palm Jumeirah is also a residential and accommodation area, packed with hotels. Standing out from the rest is the Hotel Atlantis, with the largest aquatic park in the Middle East, Aquaventure Waterpark.

The Palm Jumeirah is one of Dubai's architectural masterpieces and the best position to see it all is from above.

The best way to get an aerial view of this amazing location is to take a helicopter, seaplane, or hot air balloon ride. However, the bravest travelers may also want to try an exhilarating parachute jump over the islands.

A more relaxing, and cheaper, way to enjoy this coastline view is to take something to drink in one of the panoramic bars which overlooks the Palm Islands. The pick of the bunch is the Observatory, located in the Dubai Marriott Harbour Hotel. The Sky Bar at the city's iconic Burj Al Arab is another good option. 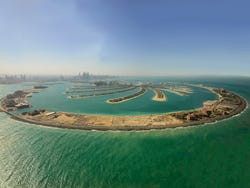 Palm Jumeirah from the helicopter 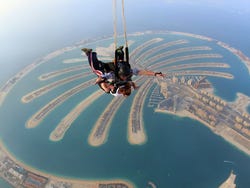 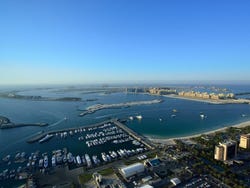 In the coastal zone of Jumeirah 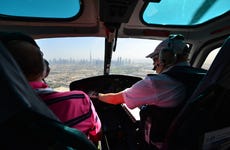