On this day trip to Abu Dhabi, you'll see two of the major monuments in the UAE, the Sheikh Zayed Grand Mosque and the Louvre Museum. Unmissable! 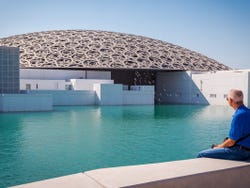 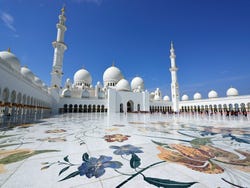 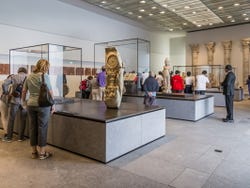 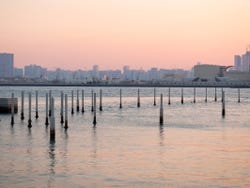 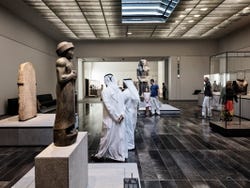 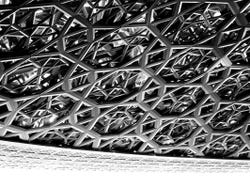 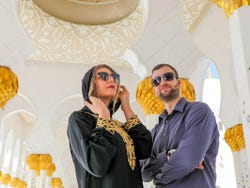 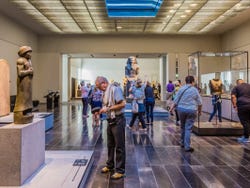 We'll pick you up from your hotel and make our way in an air-conditioned bus to the capital of the UAE, Abu Dhabi. Over a 90 minute journey we'll head to the Louvre museum, the first stop on our excursion. This marvel of architecture, with its playful attitude to light and space, is the first museum to carry the Louvre name outside of France.

The museum houses over 600 pieces imported from various continents, among which are works from the French Louvre, the Centre Pompidou, the Orsay Museum, and the Palace of Versailles. Here you'll have free time to get lost in its hallways, see the characteristic artwork from each period from history, and see the "Rain of Light" spectacle.

After this art tour, we'll continue to our next destination, the Sheikh Zayed Great Mosque, one of the largest and most impressive in the world. It can hold up to 40,000 people and its total area, along with the gardens and paths which surround it, is 12 metres in total. You'll have the opportunity to access the inside of the mosque and admire the mixture of Islamic and modern artwork inside.

The tour returns to Dunai at around 4 pm.

It is compulsory to present a Covid vaccination certificate, a negative PCR test or antigen test taken up to 48 hours before the activity.

The activity takes place with a guide that speaks in English.

Hotel pick up and drop off.

Entry to the Abu Dhabi Louvre.

Abaya to enter the mosque.

You can book up until 24 hours before the activity as long as there are still places. Book now to guarantee your spot.

Electronic. Show the voucher on your phone.

All services published on Civitatis are carried out in accordance with our Sustainability Code.

No printing of documentation required.

If you have any other questions please contact us.

Free! Free cancellation up to 12 hours before the activity starts. If you cancel under this time or do not show up, you will not be refunded.

These are genuine reviews written by our customers.

Great tour, the staff was very nice and knowledgeable.

Guide was on exact time as informed previous day by message, plus he had a nice knowledge of city and highlights.

I travelled with friends
10

Jahan was a great guide. I love the 2 places. Pleasant and informative and rare sights.

I travelled by myself
10

This day was fabulous, Our guide Noors was an extraordinary guide, he guided and informed us throughout our visits. The large mosque is breathtaking and the Louvre museum is absolutely magnificent, both in the beauty of the building and the quality of the works on display. I recommend this excursion without hesitation. Opinion translated. Show original.

This guided visit to Abu Dhabi mosque and Louvre museum has been absolutely gorgeous.! It's a must! Our tour guide, Shan, delivered to us all the right, full and clear information and answered all the questions. I quote this 5+ on a scale 0 to 5, being 5 the top satisfaction. King regards and thank you for this tour that we will remember forever.

I travelled with my partner
Show all the reviews
like

9.20 / 10 679 reviews
Experience the best of Dubai: see the city’s most iconic sights and spend an evening in the desert with dinner underneath the stars.
US$ 103 US$ 85
Book
like

Desert Safari with Dinner and Show

9.40 / 10 1,915 reviews
Make the most of your trip to Dubai experiencing an incredible Desert Safari. An unmissable activity!
US$ 62
Book
like

10 / 10 1 review
Experience Dubai in true Emirati luxury and admire the incredible coastline with this yacht cruise of the Marina. See the city's most iconic landmarks and enjoy a delicious meal on board!
US$ 53.30
Book